When is a blocker not a blocker?

One of the buzzwords you hear in poker all the time is the concept of a blocker. The idea is simple enough, you having a card means your opponent doesn’t have it and there’s strategic implications to that. But today I wanted to share with you something fun and interesting about blockers that applies to games like Omaha hi/lo and very much applies in a game like deuce to seven triple draw.

It is not uncommon in those games to be in a position of holding cards that “block” the opponent and this often has a material impact on your play. For example, in deuce to seven if you keep drawing low cards but they pair the cards in your hand you have a bad hand but a hand that can sometimes be used as a bluff. The reason is simply that if your opponent is drawing also it is going to be hard for them to fill their hand with low cards if you’ve seen a bunch of threes and fours for example. In Omaha hi/lo, if the board reads 8 2 3 and you have a bad hand like 2344 at least you have some reason to believe your opponent isn’t holding the nut low A4 combo. But there are situations when a blocker is not a blocker.

In Omaha hi/lo variants it is generally true that playable hands very often have A2 or A3 combos in them. In deuce to seven very few playable hands don’t start with a deuce in them. These principles become particularly true if someone has opened from an early position. So when you are deep into the hand and contemplating your “blockers” reflecting back to that your opponent started with a strong range is important. In deuce to seven even if you have seen three deuces go through your draws and you know there is only a single deuce left you probably still don’t have blockers if your opponent had originally opened from a position implying a strong range. There is only one deuce left but he has it. Similarly in Omaha hi/lo you having a pair of deuces on your hand is not going to be overwhelming evidence that the UTG opener doesn’t have A2 in their hand.

In poker everything is contextual and the same applies to blockers. 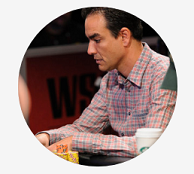