Vomit at the Poker Table

These two situations are the closest I’ve come to puking at the poker table. This first one still stands as my most bizarre experience at a poker table.

It was the tail end of a long session. The guy to my immediate right was a semi-regular older white guy who drank… a lot. He was the kind of guy who had so much “experience” drinking that he could more or less go through the motions at the table despite being pretty far gone. A lesser drinker would have passed out under the table long ago. He was an odd but nice enough guy who never harmed anyone. I was lulled into a false sense of security. The fatigue of the session got to me. I yawned.

Apparently this was an invitation he couldn’t refuse. He stuck his finger in my mouth!

You can’t make this shit up. My memory of the incident is of trying not to gag, and trying not to bite down in some kind of horrendous reflex action. I’m still scarred emotionally.

The guy is still a regular. He has no memory of it. 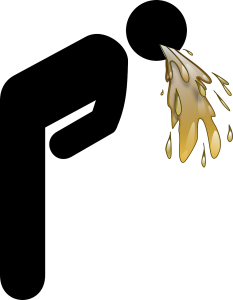 This story is very similar. It’s from the WPT main event at Thundervalley a while back. Blinds are 75/150 and a weak player who opened frequently raised to 400. Paul Volpe who had just sat down called the 400. I had 7d5d in late position. My image with the original raiser was as a nit so I decided (probably misguidedly) to reraise to 1400 and try to steal the 1K out there.

I certainly did not count on Jonathan Little reraising to 4.5k behind me from the big blind. The original raiser folded and I intended to muck my hand but Volpe unexpectedly cold called Johnathan’s raise. I was really regretting ever getting involved in the hand but I couldn’t pass up these pot odds in position. I figured let’s play a big 3-way pot with Jonathan Little and Paul Volpe, what could possibly go wrong? Volpe and I had close to the 30k starting stacks, Jonathan had us both well covered.
The flop came 4d-3c-3h. There was almost 14k in the middle. I didn’t flop the world by any means, just a gutter and back door diamonds but Jonathan led out really small, something like 4.5k. Sweetening the deal Volpe called. I had four outs to the effective nuts and would be very likely to at least double up if I spiked a 6. I have to call 4.5k and the pot is already 23k. The implied odds for my gut shot draw are there given how likely it is more money is going in on the turn. What is more I could also turn a diamond and potentially continue to the river with more outs. Jonathan had big cards for sure. I had no idea what Volpe was playing at.
Turn 6h! Board now reads (4d-3c-3h) 6h
I felt like Mike McDermott getting ready to vanquish Teddy KGB. I was going to double up through two of the toughest players on the circuit in a 4-bet pot with 7d5d that no one saw coming. My name would be up in lights.
Jonathan announces “all-in”
Volpe snap calls.
I can’t believe it. I double check my cards.
I call.
Jonathan turns over AhKh for the nut flush draw. Volpe turns over KdKs and is pretty much dead. I just need to fade the hearts to triple up.
River is black! Yes! The Kc.
Wait… What? Dealer pushes the pot to Volpe.
I am sick to my stomach.