Some Hands Stick With You (WSOP Main Event 2017)

Bobbed and weaved but they finally got me in the last level of day 2c. I had a great experience overall during the main event and played lots of interesting hands. One hand really stuck with me. You know the one that leaves you wondering?

The turn card was a card much better for my opponent’s range of hands. My opponent was also an online beast called Timothy Ulmer. He only had 25k left but it was enough to inflict serious damage on me and the perfect stack size for him to check raise allin on the turn if I bet. He would be able to do this with all his value hands obviously (2 pair+) but he could do this with any decent combo draw and he has a ton of them in his range (think 56, 67, 89 etc). I’d almost be obligated to call off half my stack in an extremely marginal spot against the toughest guy at the table. Not fun. 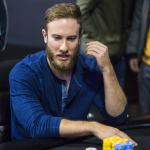 So I checked back to evaluate the river. The river was super interesting. 2c. The board reads (7c-8d-2s-5c) 2c. It brought the backdoor flush and improved my hand over all his two pair hands he might have had on the turn (unless he had something crazy like 72). He checked and although I thought he was dangerous it seemed crazy not to go for value here. No reason to think he has a backdoor flush and his 2 pairs are beat. I bet 6k. I figured the only no pair hand he could have was T9 so with all his other hands he would have a bluff catcher. If he believed that I was representing the flush (which is hard for me to have) I figured he’d be super tempted to call.

He thought for a while and then I knew what was coming, he announced “All in”.

Against the vast majority of opponents this is an easy fold. Not many players check raise bluff the river for their tournament life in the main event. But of all the players, this guy could. He knows I’m very unlikely to have a nutted hand here. He hadn’t done much tricky stuff in-game up to that point and in fact had been kind of snug but I knew it was possible because I had researched his exploits online before play started.

I was leaning towards the default which was to fold but I gave it a ton of thought. In the end I felt like he’d have to believe a parlay of things that just made it seem a less likely bluff:

1. He’d have to believe that if I had an overpair I would fold it for 19k more in a big pot.

2. He’d have to believe I was unlikely to have the back door flush because I’m never folding a flush obviously

3. If he thought I was bluffing he’d have to not have a pair otherwise he’d just call to pick off my bluff instead of risking his whole stack. The only hand he would rebluff with would be T9, the only draw that can call flop but not make a pair by the river.

I decided it was a fold. But I was left wondering perhaps because it was reminiscent of this hand in my recent memory. Tough spot.